For a long time, the Luxury industry has mostly been under the monopoly of Occidental brands & companies. Since several years the Chinese customers have proven themselves to be of increasing importance for the overall market, a real gold mine of clients while historic customers started to represent a smaller part of the global consumption. It was only quite recently that countries like China started to take the matter into their own hands, participating in the emergence of new brands, injecting new blood in the Luxury business. Shanghai Tang was created in 1994 by the Hong Kong originated businessman David Tang.

As if rapidly seeing the potential of this brand willing to revisit the Chinese fashion of the 1920’s and 1930’s, Richemont acquired it only 4 years after its creation. With around 50 boutiques worldwide, and a great number in China, our team was able to visit two of them to investigate in one of its fief, Shanghai. Both in strategic areas for Luxury stores -Middle Huaihai road and Xintiandi, they offer a quite similar experience once inside.

If we expected the store to contain some traditional Chinese inspired clothes, we were quite surprised to realize that it was the case of so many models, accessorizes put aside. Qipao and Frog buttons everywhere, we wandered the store. When we questioned a young Chinese woman outside one of the stores about what she thought of the brand, she seemed quite seduced by it, as many Chinese we asked about later. She qualified the clothes as « trendy » and « stylish » and, though it was inspired by Chinese quite traditional clothes it was also, to her, mixed with « global modernity ». She also enjoyed the guest experience and the interior design of the boutique.

While we also found the inside of the store quite appealing, colorful and a bit Art Déco it is very interesting to highlight the difference of perception between us European and Chinese customers. Where she found the guest experience a clear added value, we felt the saleswomen were way too present, almost invading, and, while it is obvious the clothes are made for modern age, we wouldn’t really say most them can be referred as “global modernity” but more like “revisited Chinese traditional clothes”.  From our perception, these were quality clothes, with nice designs and exotic patterns, but mostly, it would more be a “one time, one piece” experience for us as customers. Is it because of the designs, the customer experience or the lack of pedagogy for foreigners, we do not know. But where Chinese find Shanghai Tang “exquisite”, we can only understand why Richemont decided to sell this interesting brand almost 20 years after acquiring it: this a Chinese Luxury brand, mainly made for Chinese people. It could not quite achieve to reach out to Europeans hearts.

THE RETURN OF THE WONDERFUL CHILDREN 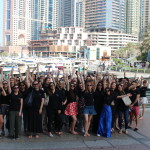