The « Saint of Saints », « high place of creation in the world » or « temple of luxury “; praises do not lack to describe the famous and prestigious Place Vendôme in Paris. The high jewelry square is greatly known across the world. This gem gathers the quintessence of jewelry and watchmaking. Nonetheless, is the history of the Place Vendôme truly known and cared about?

Focus on the lively history of a Place that was initially not meant to such a promising future.

The story of the Place Vendôme dates to the reign of Louis XIV. In 1699, Jules-Hardouin Mansart, official architect of Versailles, designed it to put the equestrian statue of the Sun King right in the center. In 1805, Napoleon won the famous battle of Austerlitz. He replaced the column of Louis XIV by the Vendôme Column. It was built from the bronze of the enemy’s cannons. At the top of the structure, he installed his statue. During Paris Commune, the monument fell next to a crowd who came to see the column as a symbol of « brute force and false glory. » It was eventually restored in 1875. The Vendome Column was therefore a way to express the legitimacy and power of Napoleon, a way to glorify the image of France and a way to flatter his pride.

With such a reputation, how did the Place Vendôme manage to reverse the situation and to convert itself to luxury?

Jewelers used to settle in the Palais Royal, near the power. The Place Vendôme, at this point, was exclusively exploited by the beautiful hotels nearby. But 1893 became a turning point for the square with the arrival of the first jeweler, Frédéric Boucheron.

The success of his settling in inspired his jewelry colleagues who opened their first boutiques in the Place Vendôme: Cartier, Chaumet, Van Cleef & Arpels, Mauboussin, and so on, progressively moved there themselves. This wave of newcomers continued with prestigious watchmakers such as Piaget, Chopard or Rolex, as well as major fashion Houses that follow a strategy of diversification (e.g. Chanel, Louis Vuitton and Dior). This craze for the Place Vendôme turned it into the focal point of French High Jewelry. Within a few decades, it became unnecessary to justify the legitimacy of a brand, from the moment they had a store in the Place Vendôme. Beyond its name changes, the identity of the Place Vendôme has therefore evolved a lot throughout history.

How could the Place Vendôme’s identity be described today?

Nowadays, the square and its surroundings have an interesting paradigm. Everything about the Place Vendôme is discreet. Jewelers and watchmakers isolate themselves, away from the rest of society and work quite discretely. They let themselves be desired and wait for customers to take an interest for them. We know where they are. We know what they are doing. Customers travel expressly from the other side of the world to go to the Place Vendôme and buy their jewels. Of course, they do it in an inconspicuous way. The jewels express themselves; they become a source of emotion.

Paradoxically, the Place Vendôme seems to be a bit ostentatious. The Louis Vuitton House which opened last October is a good example of that. At the exit of the Malletier’s House, visitors continue their excursion. They enjoy the setting, the stroll, they take the time to discover and admire the jeweler’s shop windows. The story told in the shop windows capture their attention and fascinates them. They take the time to dawdle on this theatrical poetry and let their imagination go as pleased. They take pretty pictures to capture the moment, to capture this experience that they just lived, before going back to their daily routine. The ambivalence of the Place Vendôme allows to bring together different social stratifications around a common base that is simply, luxury. 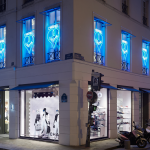